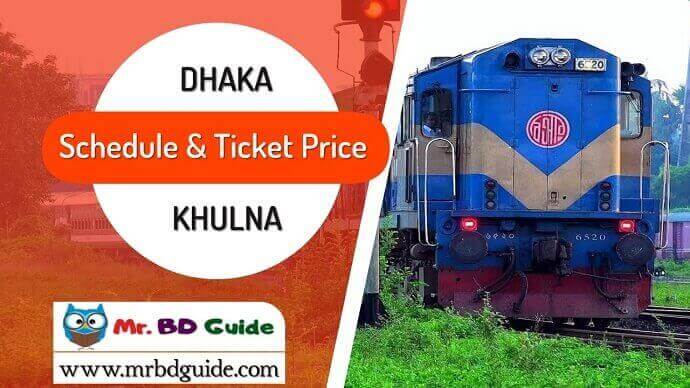 Dhaka To Khulna To Dhaka Train Schedule and Ticket Price The latest update is our today’s topic of discussion. If you are trying to get the latest Khulna to Dhaka to Khulna rail schedule along with ticket price then you are in the right place.

We will discuss everything about this train route. We will share both of the routes that are Dhaka to Khulna route and Khulna to Dhaka route. However, we will also discuss the stoppages and schedule for both the Intercity and Mail train schedule and ticket price as well.

Dhaka To Khulna To Dhaka Train

Sundarban Express is one of the most popular trains in Bangladesh Railway. It is also the first train running on Dhaka to Khulna and Khulna to Dhaka route 6 days in a week. It runs in the daytime. So, if you are trying to travel in the daytime then your best choice must be Sundarban Express.

Sundarban Express starts its journey at 6.20 AM in the morning from Dhaka and reaches Khulna at 16.10 PM. It is an express train and it runs 6 days in a week from Dhaka as we said earlier in this post that it has one off-day which is Wednesday.

Seat distribution is standardized by the Bangladesh Railway authority. There are several standards of seats available in every train running on the railroad in Bangladesh. Ticket prices are based on the standard of the type of seats.

During its travelling in Dhaka to Khulna route Sundarban train has some stoppages where it leaves its passengers. Stoppages are those railway stations where the train stops and passenger whose destination is this station leaves the train.

Now, in this section, we are going to share a list of those stoppages so that you can remember them and use them as needed. But remember one thing, sometimes due to negligence if you forget stoppages then you should visit our website and get it from here. Now, let’s see the stoppages of the Sundarban train route of Dhaka to Khulna and Khulna to Dhaka.

Chitra Express is an Intercity train which has 12 passenger coaches behind the engine of the train. It has a huge loading capacity of 881 passengers. So that a large number of people can travel on this train at a time. You will get all of the modern facilities in Chitra Express.

We have shared that there are two express trains are running in this route of Dhaka to Khulna. Now, so far we have explained in-depth information regarding those two trains. Now, here in this section, we are presenting you Dhaka to Khulna train schedule 2020.

Now that we know the schedule and off-days of both of those trains. Let’s see the ticket price of both of the trains. Dhaka to Khulna and Khulna to Dhaka train ticket price seems to be the same. Ticket price varies according to class. The below table section will provide comprehensive information.

That’s all for this discussion of Dhaka to Khulna to Dhaka train schedule along with details of their ticket price. Now, If you are interested to travel in this route then you need to read the above article carefully.

After complete reading, if then you have any further queries or questions regarding Dhaka to Khulna to Dhaka Train schedule or timetable and ticket price. Please let us know through the below comment form or you can use our contact us page. Our dedicated admin will reply to you through the channel you used to contact us with an answer to your query.

Comment Policy: Your words are your own, so be nice and helpful if you can. Please, only use your real name and limit the number of links submitted in your comment. We accept clean XHTML in comments, but don't overdo it, please.Let's have a personal and meaningful discussion.

Please Say Something or Ask Any question about this topic! Cancel reply