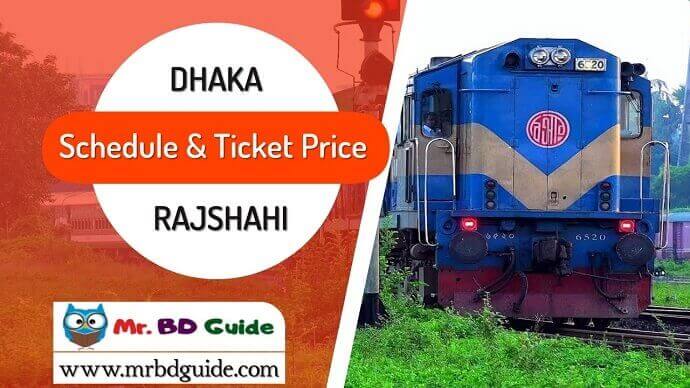 Here in this article, we are going to discuss Dhaka to Rajshahi to Dhaka train schedule and ticket price also because sometimes people may get confused with the cost to train tickets. We are providing information here according to Bangladesh Railway official website. We will also update this information whenever the official source changes anything. 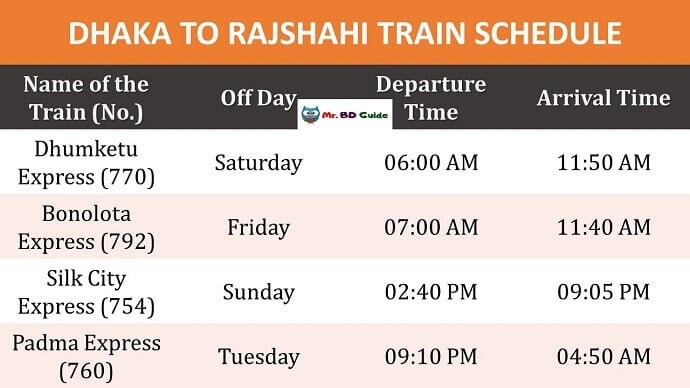 The above image contains all the train’s Dhaka to Rajshahi Train Schedule.

You know that Rajshahi is a division of Bangladesh. As a division, it has a different significance all over the country. So many people are traveling daily on those routes of Dhaka to Rajshahi and Rajshahi to Dhaka because it is a division.

All of them are running on the route of Dhaka to Rajshahi with only one off-day in a week. The off-day distribution is quite simple on this route. Only Dhumketu express takes off-day on Saturday. We will share all other off-days later on this post.

We will also share the stoppages, destinations, as well as departure time and arrival time. Finish reading this article. You will know and understand everything you need to know for traveling Dhaka to Rajshahi or Rajshahi to Dhaka by train.

WE all know that Dhaka is the capital of Bangladesh. Many people come here to work from every corner of Bangladesh. Like this way from Rajshahi also many people come to Dhaka. Most of the people using the train service for traveling to Rajshahi for their specific purpose and they also feel comfortable on train travel.

The off-days are also different for both destinations on Rajshahi to Dhaka travel route. Such as, for Rajshahi the off-day of Dhumketu express is Sunday and for Dhaka it is Saturday. Let’s discuss other relevant information regarding Rajshahi to the Dhaka train schedule and ticket price.

Bonolota Express is the latest upgrade to the Dhaka – Rajshahi rail route. It is the most upgraded facility that contained rail couch in this route. It started its service on this route on 25th April 2019. It is also the fastest train on this route. It takes only four and a half (4.5) hours to reach its destination.

Banolata express has 12 passenger bogies, excluding the engine, and it can carry a minimum of 928 passengers. Previously the food fair was included within the ticket price. But on may 2019 that was stopped by the government. Meaning is that now there will be no food supply during your journey from Railway authority.

Dhumketu Express is one of the most popular rail-couch travelling in this Dhaka to Rajshahi and Rajshahi to Dhaka train travel service. The journey of Dhumketu Express starts from Dhaka at 06:00 AM. After six (06) hours of the long journey, it reaches Rajshahi at 12:00 PM.

Dhumketu Express starts its journey from Rajshahi at 11.20 PM and after more than five (05) hours of traveling it reaches Dhaka at 04:50 AM. This train also has off-day which is, Monday from Rajshahi and Tuesday from Dhaka.

Padma Express is another one of the most popular rail-couch traveling on Dhaka – Rajshahi rail route. Train code of Padma Express is from Dhaka 761 and Rajshahi it is 762. It starts its travel from Rajshahi at 04:00 PM after more than five hours it reaches Dhaka at 09:40 PM. From Dhaka, it begins at 10:45 PM and arrives at Rajshahi at 04:45 AM. 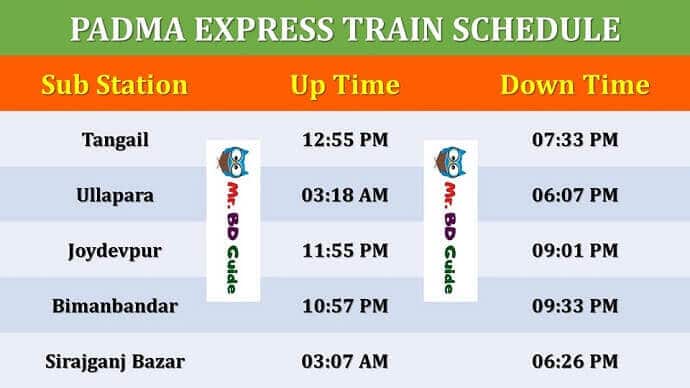 The Silk City Express is the most popular Intercity train service running on Dhaka – Rajshahi route for years. It starts its journey from Dhaka Kamala Pur railway station at 02:45 PM, and after more than 5 hours it reaches Chapainababganj, Rajshahi Railway station at 08:35 PM. It starts its return journey from Chapainababganj, Rajshahi at 07:40 AM at it reaches Dhaka at 01:30 PM. Holiday from Dhaka and Rajshahi is Sunday.

Silk City has only few stoppages in Dhaka to Rajshahi or Rajshahi to Dhaka route. Here is the list of those stoppages at a glance.

We hope now you know all about Dhaka to Rajshahi train schedule and ticket price. We are at the end of this discussion of Dhaka – Rajshahi train. We are trying to assist you by providing important information. We are publishing informative articles regularly. Be with Mr. BD Guide. You will get everything you need related to information. Apart from this, if you need any information or if you have any queries please let us know through the comment box below. You can also use the contact us page for contacting us.

Comment Policy: Your words are your own, so be nice and helpful if you can. Please, only use your real name and limit the number of links submitted in your comment. We accept clean XHTML in comments, but don't overdo it, please.Let's have a personal and meaningful discussion.